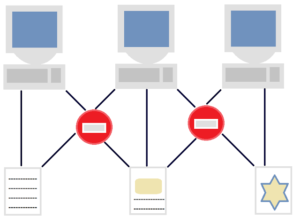 What Is Computer Network?

Computer Network is a digital method to connect different computers to exchange ideas, share required resources, and communicate with different users. In the current period, the Internet is a perfect example of it which is used across the whole world to perform different operations.

Business Applications: Computer Network is used for resource sharing purposes like – Deal for some Products or Goods through E-mail.
It is used for E-Commerce services.

Home Applications: Computer Network is used for Entertainment purposes like – Chatting, Video on Demand, Cable TV Networks, etc. Home Shopping a kind of E-commerce is being accessed over it.

Social Applications: Computer Network helps in exchanging ideas and sharing their point of view through Newsgroups or Bulletin Boards. It is used for sending or receiving valuable documents through emails.

Local Area Network is generally owned by a single party such as – a Company, a Campus, or a Building which is to be spread not more than a few kilometers.

Metropolitan Area Network helps in connecting customers of an entire city under one network. The target behind introducing MAN is to provide enough bandwidth to attract a large number of customers.

A Wide Area Network is a type of Computer Network which used to connect different cities, country or continents under one network. In WAN, a collection of machines are used for running user applications (programs) and these machines are known as “hosts”.

Inter-Networks is a type of Computer Network which connects different networks to each other in a chain which is also known as today’s “Internet“. A collection of Local Area Networks connected to a Wide Area Network is a form of the Internet.

By the name “Wireless Networks,” it is obvious that this type of computer network got connected without wires and works at the same level of speed and management i.e occupied by wired networks.

Home Networks is introduced to connect different home appliances to a common network (i.e.- Internet) and could be accessed from anywhere. After applying this concept users can control their devices without getting worried.