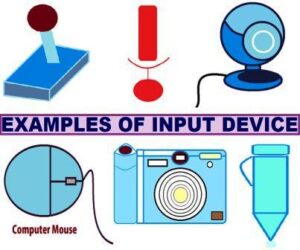 What is an Input Device ?

An Input Device is a hardware component which helps the user to provide a proper instructions to Computer System. Input devices act as an intermediary between user and other computer components. Most of input devices interact with or control the computer system in some instances.

Generally used input devices are Mouse and Keyboard but there are more examples of input devices of computer which performs many other important functions which made user works more easy and efficient. Some of them are listed below :

Each Input Devices are described below in detail :

Keyboard is an example of mostly used input devices. Keyboard is used for typing purposes in computer system. Keyboard helps the users to express their instructions to computer and get job done. It contains Alphabets, Numbers, Special Characters and many other important Keys which performs some specific functions.

There are different types of Keyboards available in the market according to user requirements, like – Qwerty Keyboard, Gaming Keyboard, Wireless Keyboard, Virtual Keyboard, Hindi Keyboard, etc.

The mouse is also an example of mostly used input devices. The mouse is used for selection and pointing purposes in computer systems. It is also known as a pointing device.

Mouse helps the users to navigate or point through any sections or icons in the computer system. It contains three buttons – Right Click, Left Click, and Scroll Wheel.

The joystick is an input device generally used for Gaming purposes and helps in navigating through different items in the computer system. Joystick consists of a flat stand on which a pivot stick is present.

That stick moves on a pivot on some angles which helps in navigating. A bob is situated at the uppermost of the stick which helps in gripping the stick for use. It looks like a gear of vehicles

Touch Pad is an input device which is used for pointing device like mouse. It is generally integrated in Laptops. It has very smooth touch experience and very fast sensors as compared to mouse. It looks like a flat surface having two button and a scrolling sensor fitted in it.

The scanner is an input device that helps the user in transferring Hard Copies to Soft Copies through scanning. It takes a high-quality image of documents which can be used as per user requirement.
Some Scanners comes with a Printer integrated, which is used for scanning and printing as well. Scanners are available in different qualities according to the user’s needs.

A digital camera is an input device that is used for clicking high-quality pictures. The digital camera can easily be carried in tours and travels which helps the tourist to take their memorable picture.

Digital Camera comes with a large storage capacity, which means users can take so many pictures without being worried about storage capacity. It is available in different price ranges and picture qualities which can be easily affordable.

Touch Screen is an input device that is in huge demand today because it can be fitted on Touch Screen Monitor and used as Mobile Touch Display. As it is named, it is being operated through finger touch.

Touch Screen gives facilities to users for direct pointing or targeting a specific area or an icon on display with their fingers. So, all the essential information is under your fingertips for end-user requirements.

Webcam is an example of an input device that is used for Video Conferencing and for capturing images while working on a computer system. After enhancement in technology, it also helps in face-unlock security maintaining for a computer system.

It helps in communicating to peoples across all over the world through video conferences over the Internet. It also helps in a Job interview when the company and job-seeker belong to long distance.\

Graphic Tablet is an input device which helps in Drawing engineering designs, graphical designs, etc. Graphic tablets are easy to carry so it can be used anywhere for working purposes.

It supports many features and tools which helps the designer to minimize their efforts and saves lot’s of time. It is also used for presentation purposes in any seminar or summit.

Light Pen is an input device which is generally used in Smart Classes and in Online learning tutorials as a pointing device. It helps in writing on smart boards without ink. Light pen works with the help of light emitting sensors fitted in it.

An overview is being discussed here in this post on a generally asked question of computer system hardware “What is an Input Device“. Here different Examples of Input Devices are discussed in detail, which is generally used.