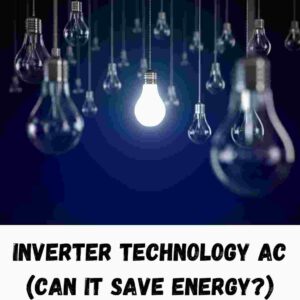 Contents hide
1 Inverter Technology AC (Can it Save Energy?)
2 Problems with traditional ACs and the reasons they consume enormous amounts of energy:
2.1 This is how it work:
3 A few things happen here:
4 How does an inverter technology AC operate?
5 A sort of fallacy but true:

Inverter Technology AC (Can it Save Energy?)

People all over the world unanimously agree that ACs or air conditioners produce a massive dent in our bank accounts in form of monthly electricity bills. However, there isn’t really much that can be done about this. ACS are power-hungry appliances.

However, the amount of energy consumed by ACs can vary. This variation depends on the technology used in the chosen air conditioner.

Air conditioners are complex electrical appliances. They operate by taking in indoor air, cooling it, and then pushing it back into the room. The cooling part is done by a component in AC known as a compressor.

The task of a compressor is to compress the refrigerant (in this case gas). When the refrigerant is compressed, it is cooled (that’s chemistry and we don’t intend to discuss it here). The absorbed air is then passed through the cooled refrigerant. This cools down the air.

Problems with traditional ACs and the reasons they consume enormous amounts of energy:

Traditional ACs are infamous for high energy consumption. Why? That’s because in traditional ACs, there are only two operational states allowed for compressors. The compressors will either always stay on or they will stay off. There is nothing in between.

This is how it work:

Because the compressor switches on and off in traditional AC, a steady temperature is not maintained. There are periods when the temperature fluctuates and the comfort zone is lost.
ACS are designed to have a maximum peak load.

In a traditional AC, as long as the compressor stays operational, it operates with that maximum peak load and then shuts down completely.

Because the compressors in traditional ACs are not designed for automatic load adjustment, they absorb a large amount of energy as long as they stay operational.

This is where inverter technology ACs beat the traditional ACs.

How does an inverter technology AC operate?

In an inverter technology AC, the compressor is never completely shut down. It keeps operating continuously. Depending on the capacity (the size of the room it is cooling), the compressor will only draw that much energy that required for maintaining a stable temperature.

The thermostat in an inverter technology AC detects the changes in ambient temperature and compares it with the predefined desired temperature level. In case of any fluctuations, the information about temperature changes is relayed instantly to the continuously running compressor.

Based on the information received, the compressor will then either increase or decrease the compression level for the refrigerant to maintain the room temperature. Thus, everything happens in real-time.

A sort of fallacy but true:

We hold a notion that continuously running motors absorb more energy that a motor that turns on and turns off as required. It is true BUT only when the motor is designed to always operate at maximum peak load (that is, the motor is a fixed speed motor).

This is what happens in traditional ACs. However, if the motor is designed to absorb only that much energy that is required (that is variable speed motor), keeping the motor continuously operational is more economical than switching it on and off frequently.

Irrespective of whether a motor is capable of automatically adjusting to the energy absorption or not, it will always and always absorb the peak load when it is first started. After it is started, a fixed speed motor will continue operating at peak load whereas a variable speed motor will adjust its energy consumption depending on the requirement.

Imagine what would have happened if the compressors in those ACs never turned off and always ran at peak load! Forget about having your bones frozen because of dramatic drop in temperature. Think about the electricity bills!

In inverter technology ACs however, compressors are not designed to operate continuously at maximum peak load. The maximum load is required only when the AC is turned on.

This is when the compressor operates at very high speed to quickly reach the desired temperature and then the energy consumption drops and the compressor continues to operate at low energy.

Contrary to inverter technology ACs, the traditional ACs have fixed speed compressors. Thus, when the AC is turned on, the compressor takes more time to reach the desired temperature and during this whole it, it operates at peak load.

So, do inverter technology ACs save energy? Yes, they always do!